In 1996, Michael Jordan led the Bulls to play the amazing record in that season.
The flying man was back !And his shoe Chicago’s red sweeping alliance, Chicago people took the championship in an unstoppable posture,they re-certified themselves in the game .

Air Jordan 11 “Win Like 96” as a testimony to the great 95-96 season, Air Jordan 11 has never changed its position in our mind, it can still be our biggest expectation at the end of the year. The great Michael Jordan’s achievements in 1996 were his best proof of breaking the shackles, making great achievements in the game, the regular season MVP, the All-Star MVP, the Finals MVP, and Michael Jordan once again ruled the entire league in that time.

Air Jordan 11 “Win Like 96” is the best tribute to Chicago in 1996 after Michael Jordan returned  with 72 wins and 10 losses scores .And finally won the championship. In 1996, Jordan returned to basketball to lead the Bulls to play the unprecedented season , and won the championship in one fell swoop.Also he  began started the second three consecutive championship journey. Air Jordan 11 “Win Like 96” is stunningly decorated with bright red patent leather and fabric. It is embellished with a black embroidered Jumpman Logo, paired with a classic translucent crystal outsole, and once again have been became frenzy at the end of the year 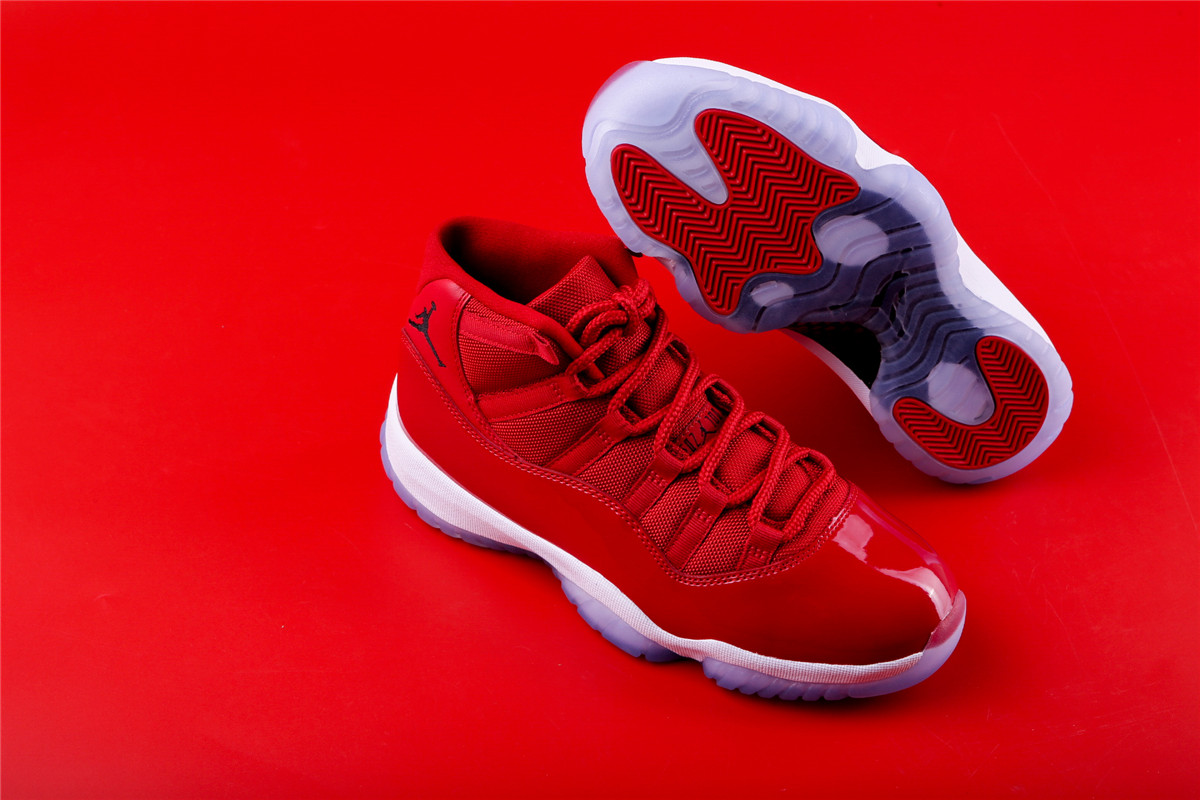 The Air Jordan 11 “Space Jam” was Nike’s most successful sneaker release of all time due to its massive availability and the hype and history surrounding that particular colorway. Will the bold and attractive all-red colorway of the “Win Like ’96”, combined with its retail abundance give it a chance to give the “Space Jam” a run for its money.The shoes has been really amazing.The Air Jordans 11 was a really a great shoe in for all fans , that is the best shoe for us . 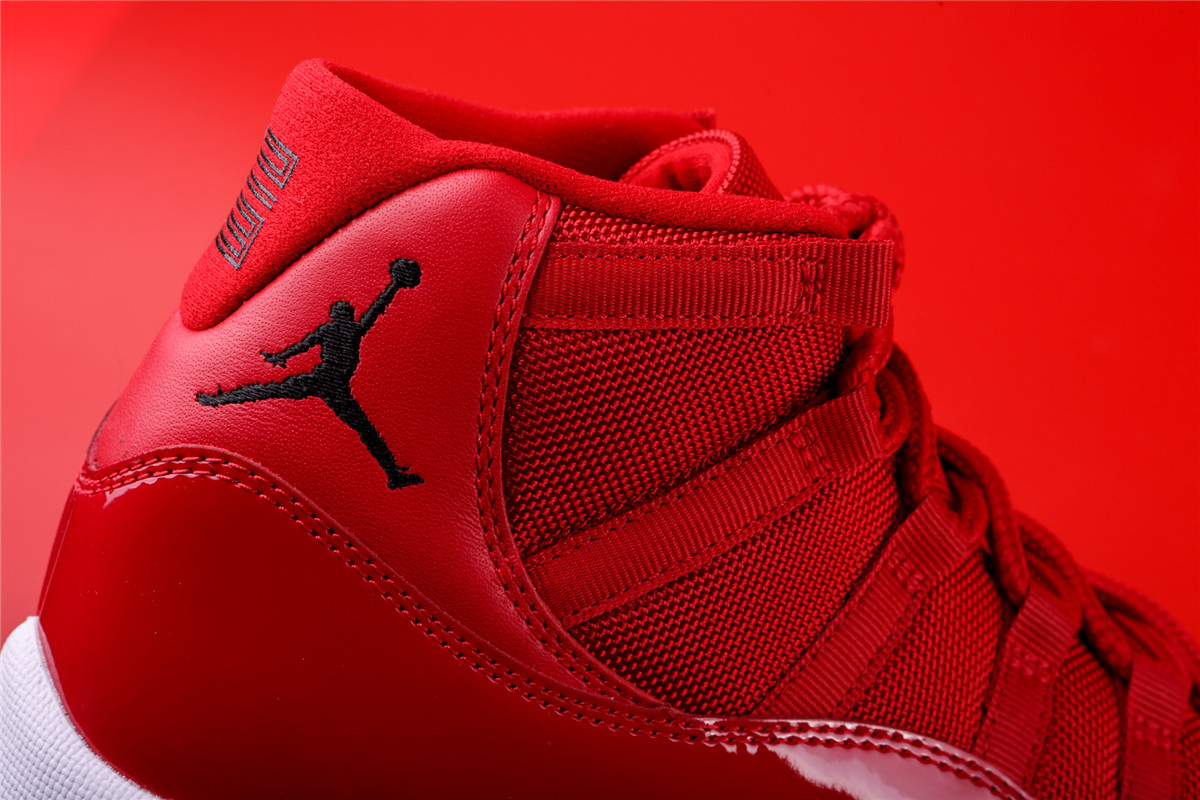 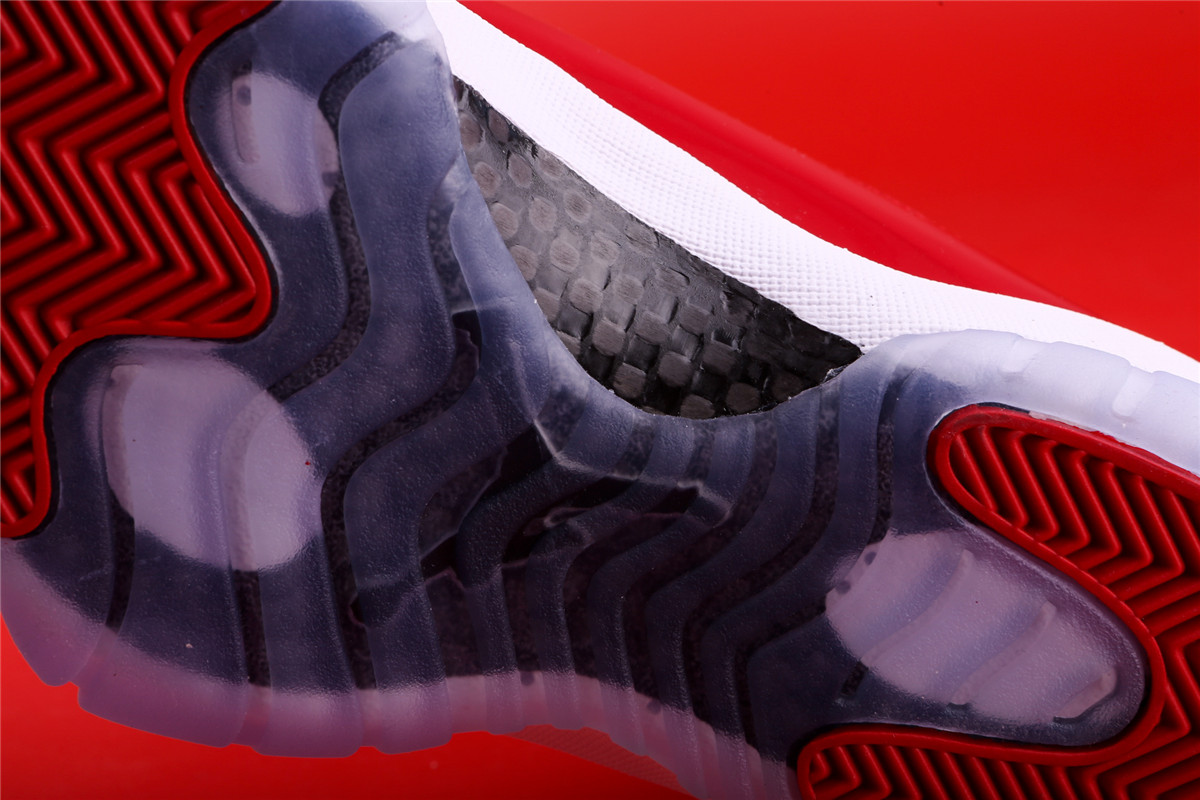 For the traction : The overall traction was very solid with all things considered ,I dont like the traction as usually , it is too stiff and solid , all of Jordans 11 followed the same traction .  Usually when you have a translucent outsole you lose traction when dust or debris is on the court but thankfully the Air Jordan XI have solid rubber traction pods located in the heel and forefoot. 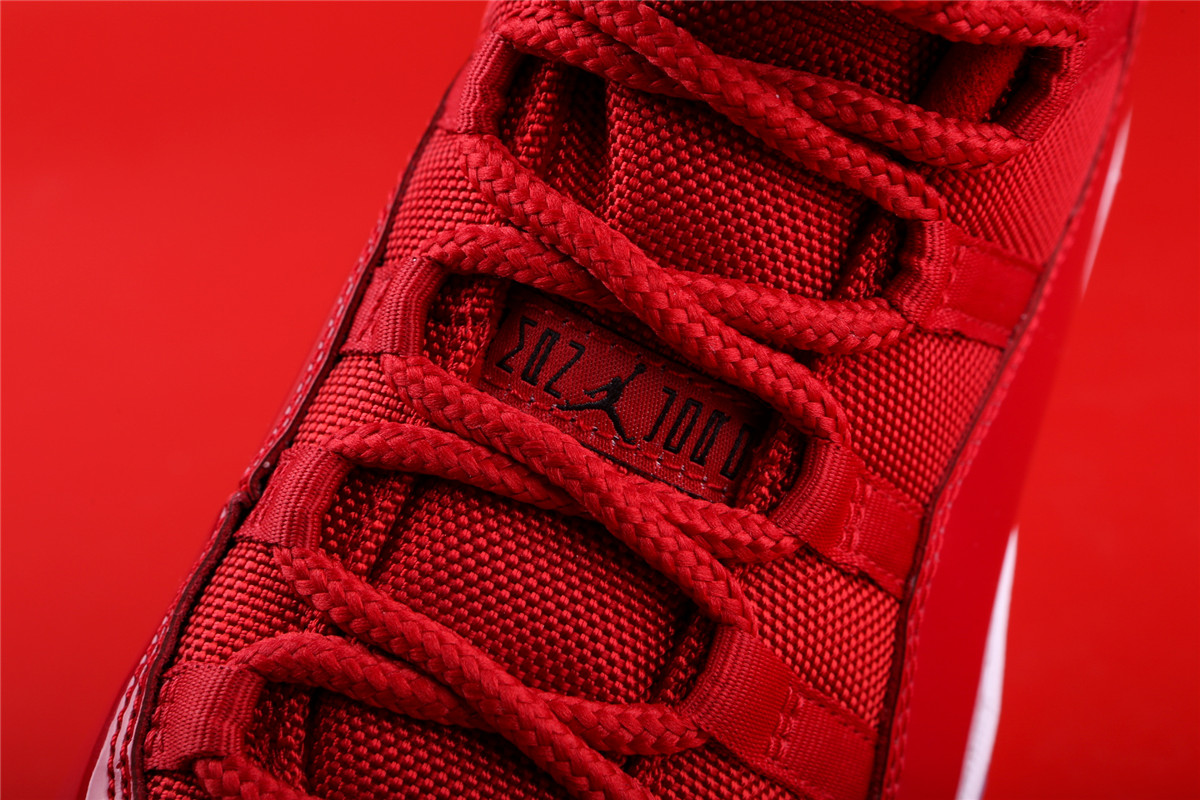 The Air Jordan 11 “Win Like ’96” is gearing up for a full-scale release in sizes available for the entire family. With a plethora of Foot Locker locations confirmed to be carrying stock, this all-red selection can be had by anyone who wants a pair. It is hard to complain about Jordan Brand giving all of its fans an opportunity at purchasing a high profile release the likes of this one, but it does raise some interesting questions. 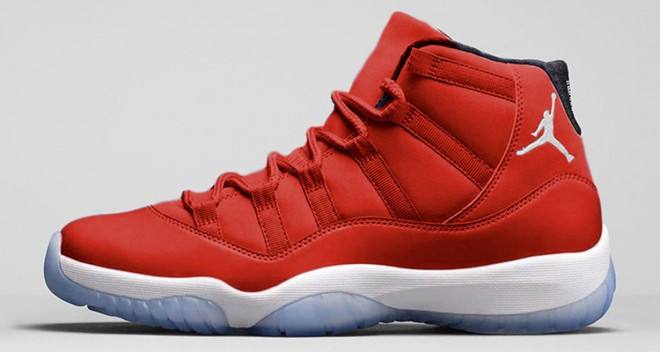 I think this pair of Air Jordan 11 “Win Like 96” is very festive, and it is different between OG color . It brings more fashionable feeling, especially for  young people. 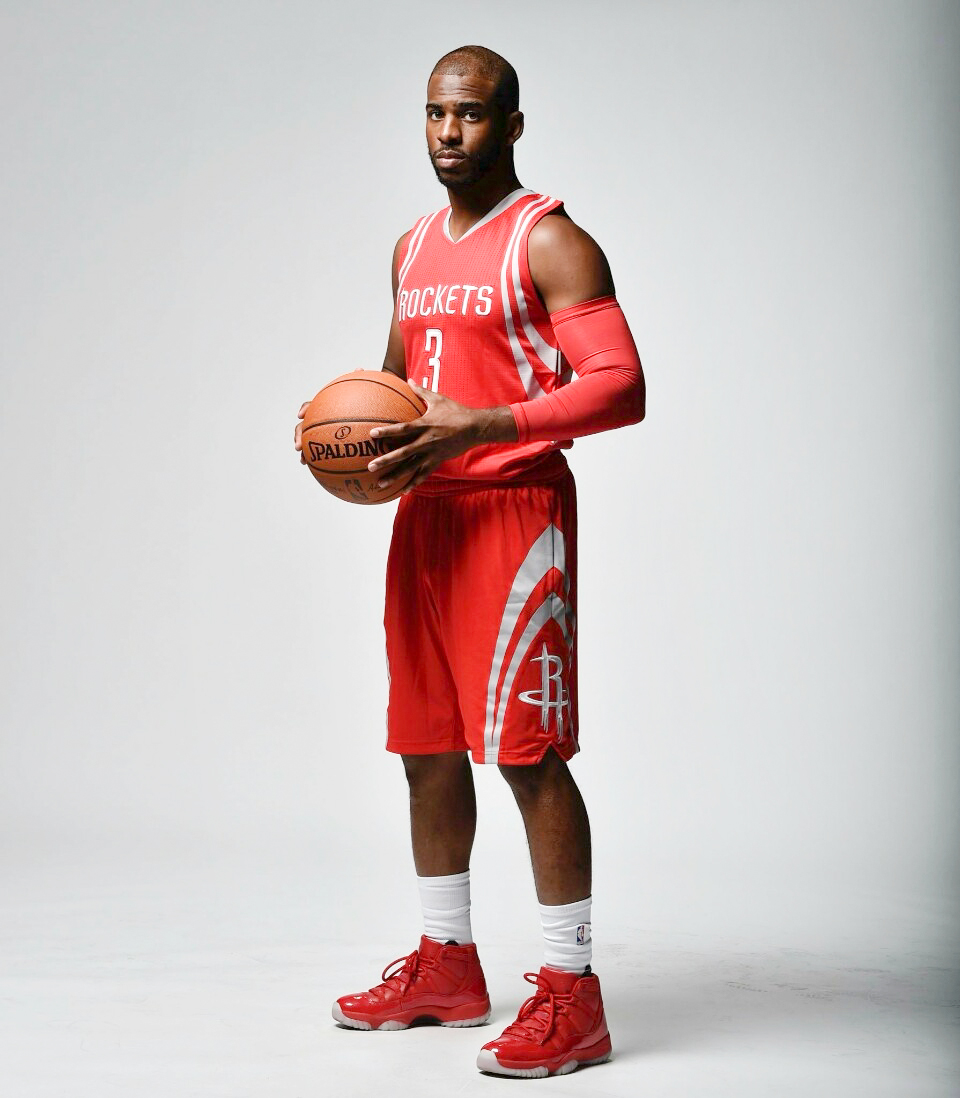 In recent years, when Jordan Brand launched PE shoes  releasesd other  shoe model, such as  the Air Jordan 11 PE for stars  Anthony and Paul, which caused a hot discussion among fans. Paul even took it directly. The first set of makeup photos after joining the rocket. “Win Like 96” presents a pair of fresh bright red with the classic elements. 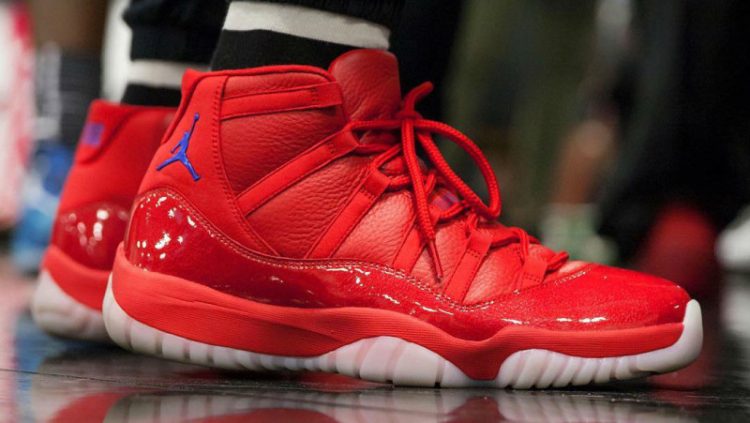 In 1996, when Air Jordan 11 first appeared, it was destined to change history. After more than a decade, it was re-enacted with several OG colors. Of course, it is hard to find a shoe until the end of each year. Then Air Jordan 11 version brings a special sense of happiness to the fans. In the past two years, as the brand has invested more in quantity and satisfied the purchase demand of more people, it is easier for people to buy shoes recently . This should be a good thing for brand merchants and consumers.It is hard to complain about Jordan Brand giving all of its fans an opportunity at purchasing a high profile release the likes of this one, but it does raise some interesting questions. 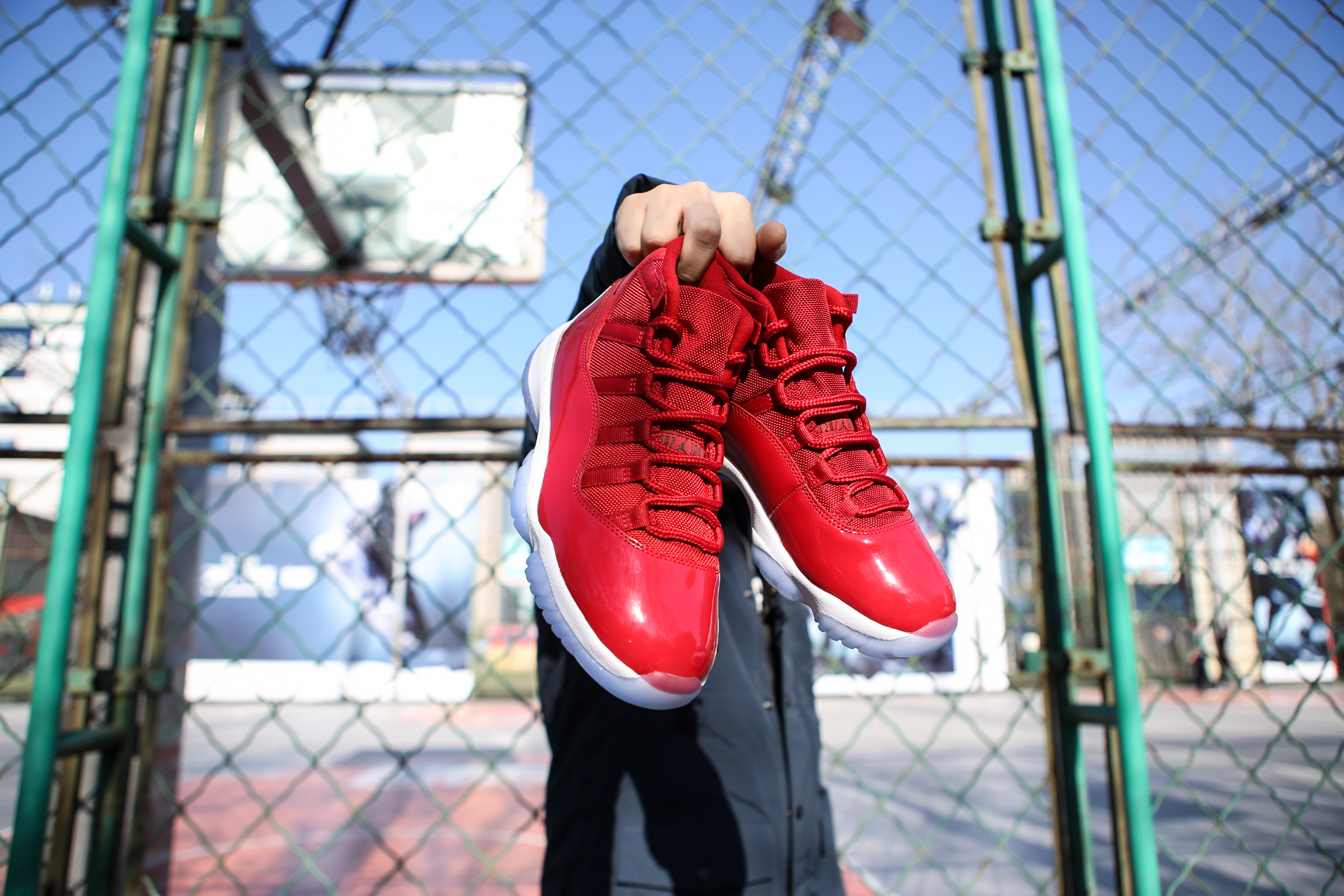 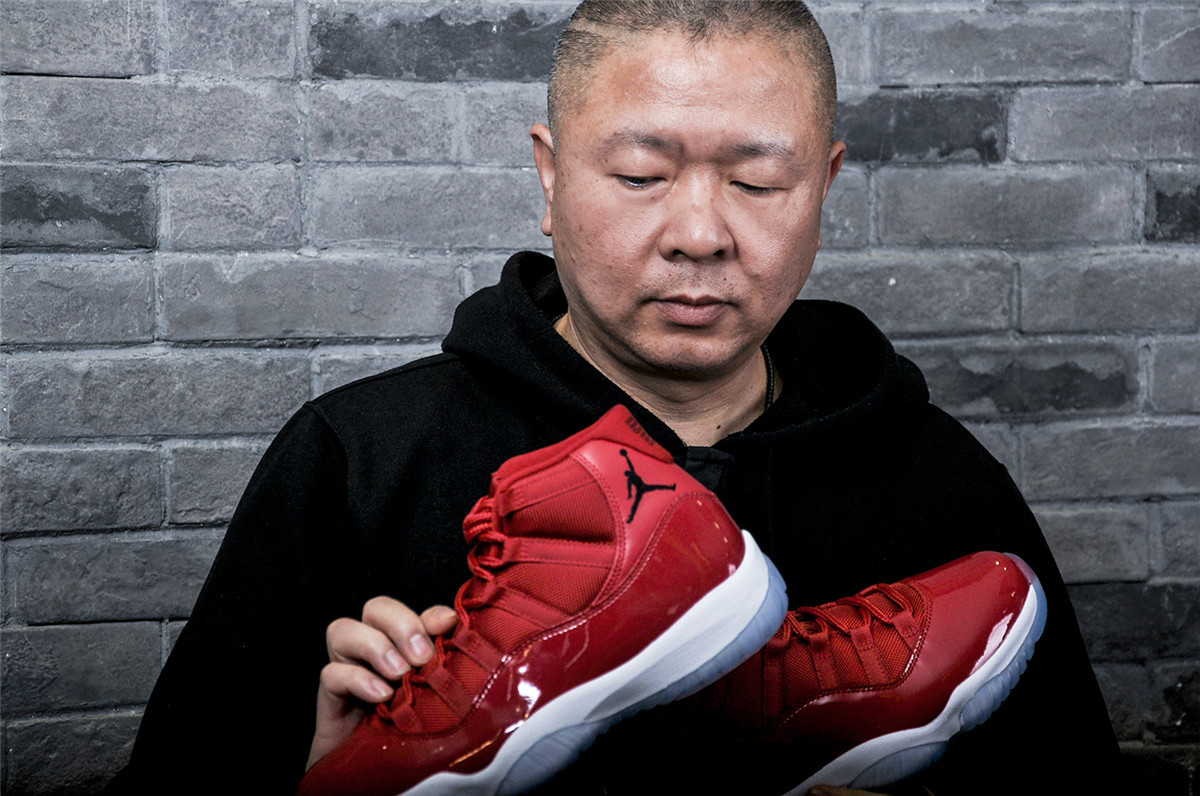 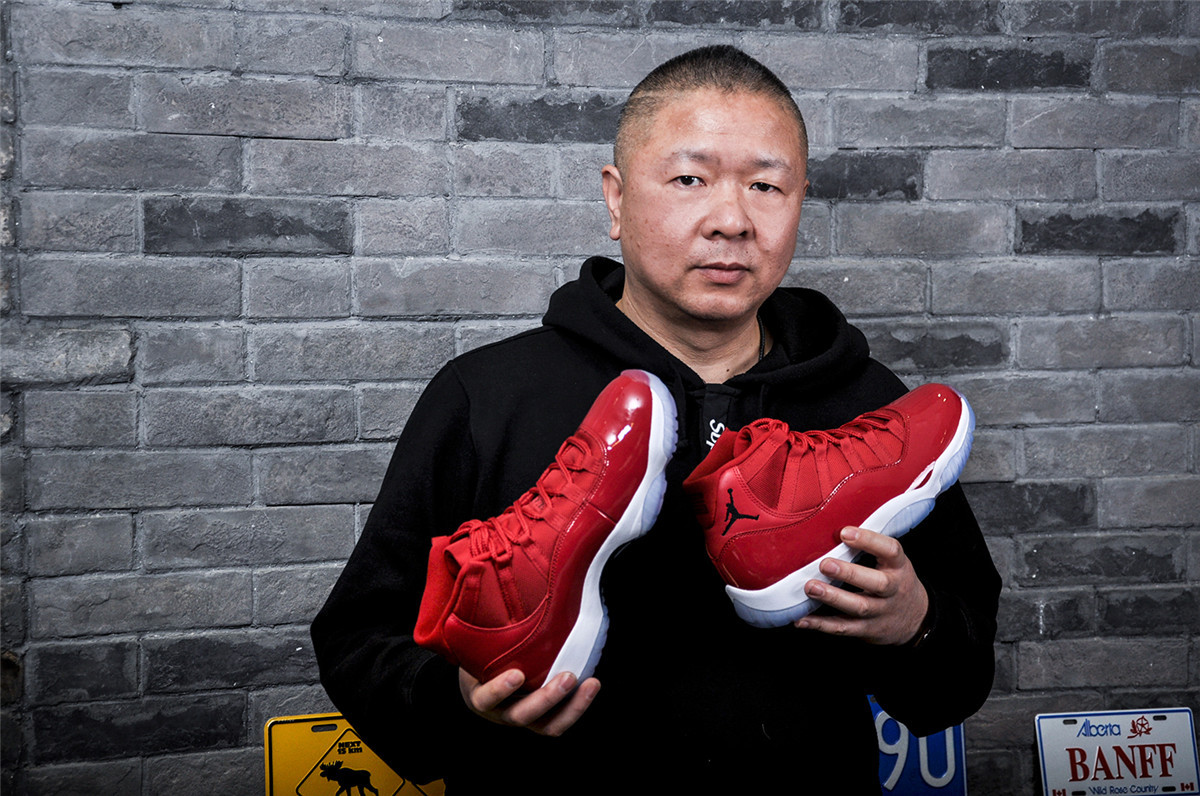 For the material : Air Jordan 11 “Win Like 96”  used the patent leather and ballistic nylon mesh are  along the upper,it is look great and similar with the other Air Jordans 11 model. Overall, the materials are nice. The patent leather isn’t quite as strong as it could have been if it were a bit thicker but all in all, the materials performed pretty much on par with the original and previous Retro versions.In fact, it is definitely a good thing for people who really want Air Jordan shoes. In the past two years, the brand has paid more attention to the version, workmanship and materials of the original style. It can be said that the retro version is more faithful to the original version, color matching. It is also to add new ideas while retaining the classic elements. In my opinion, this is the best basketball shoe to start the the game . The price is reasonable and easy to start. 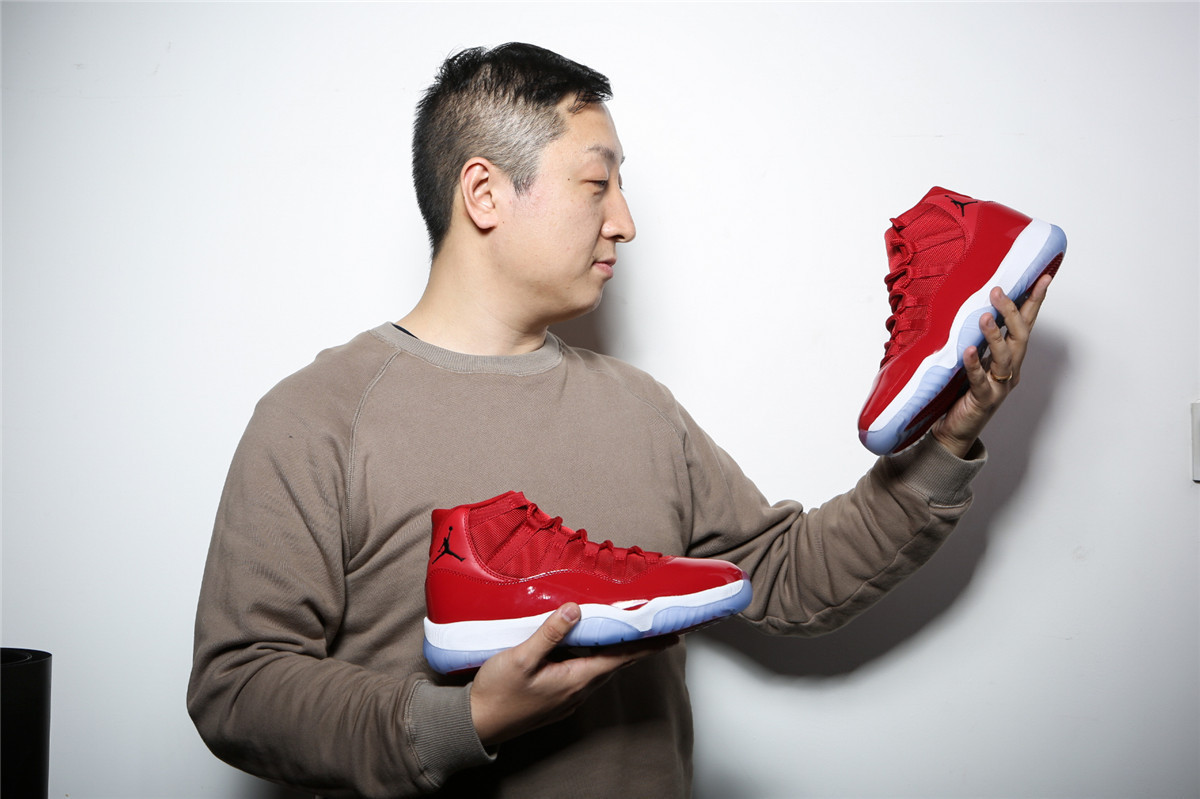 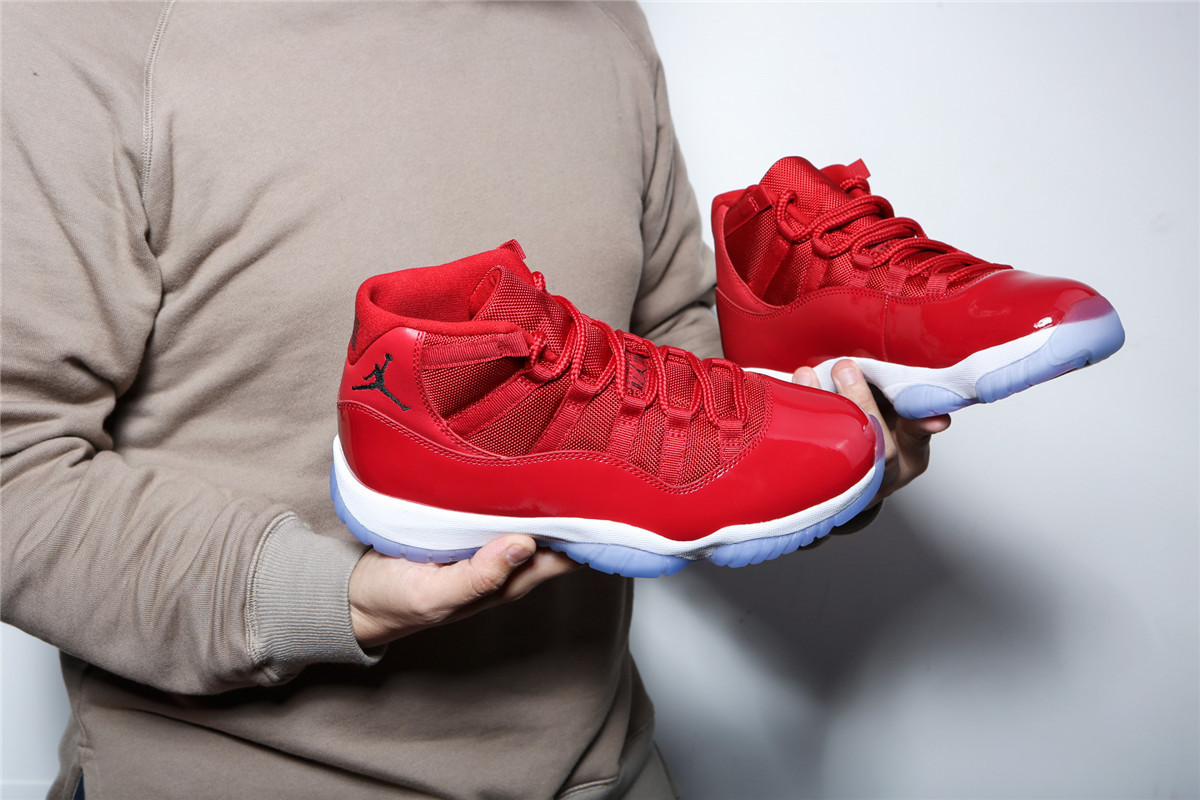 The mesh wraps around your foot perfectly and the patent ads some support which is greatly needed. Lockdown is great all the way up the shoe so there isn’t much to complain about. 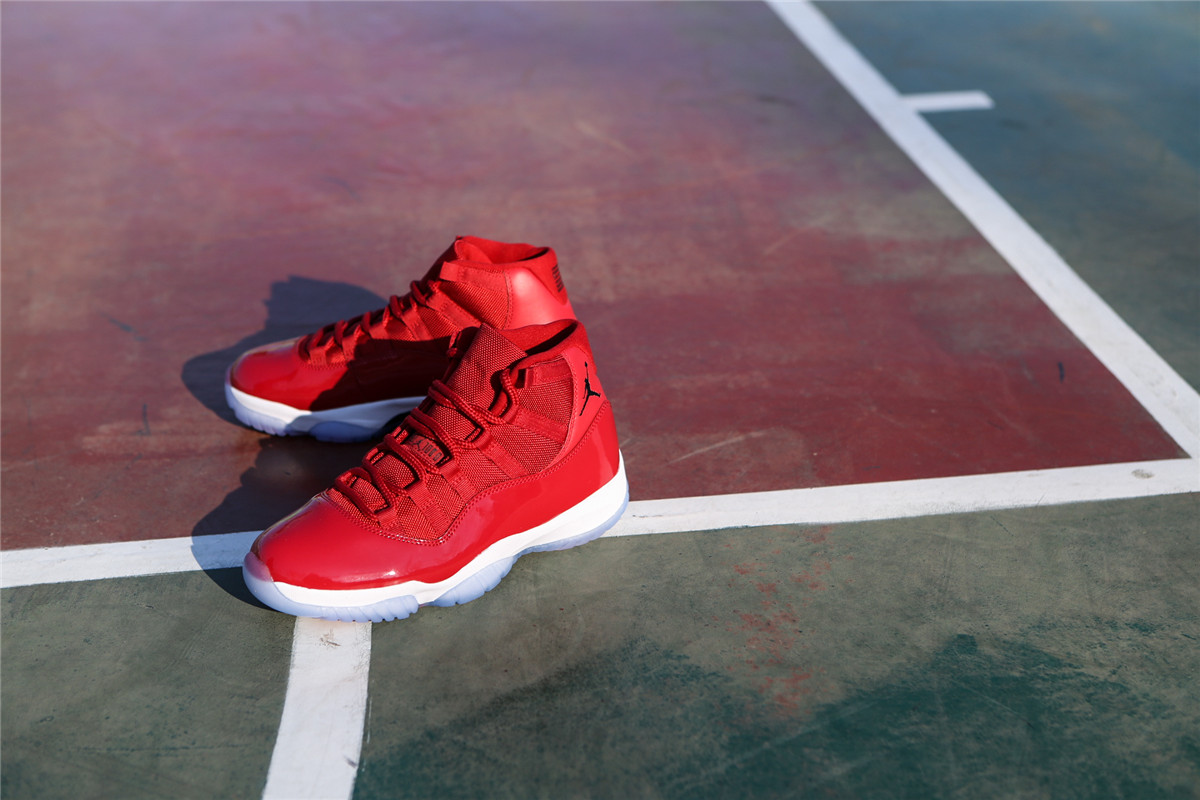 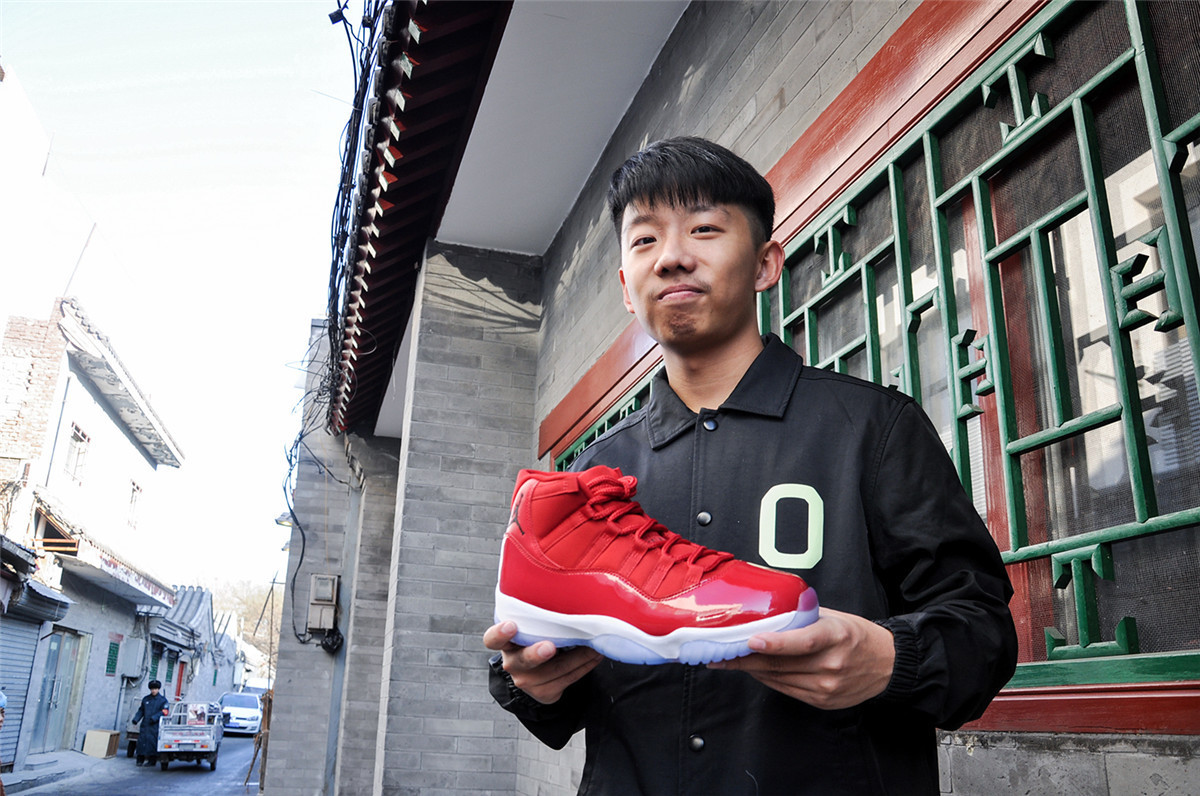 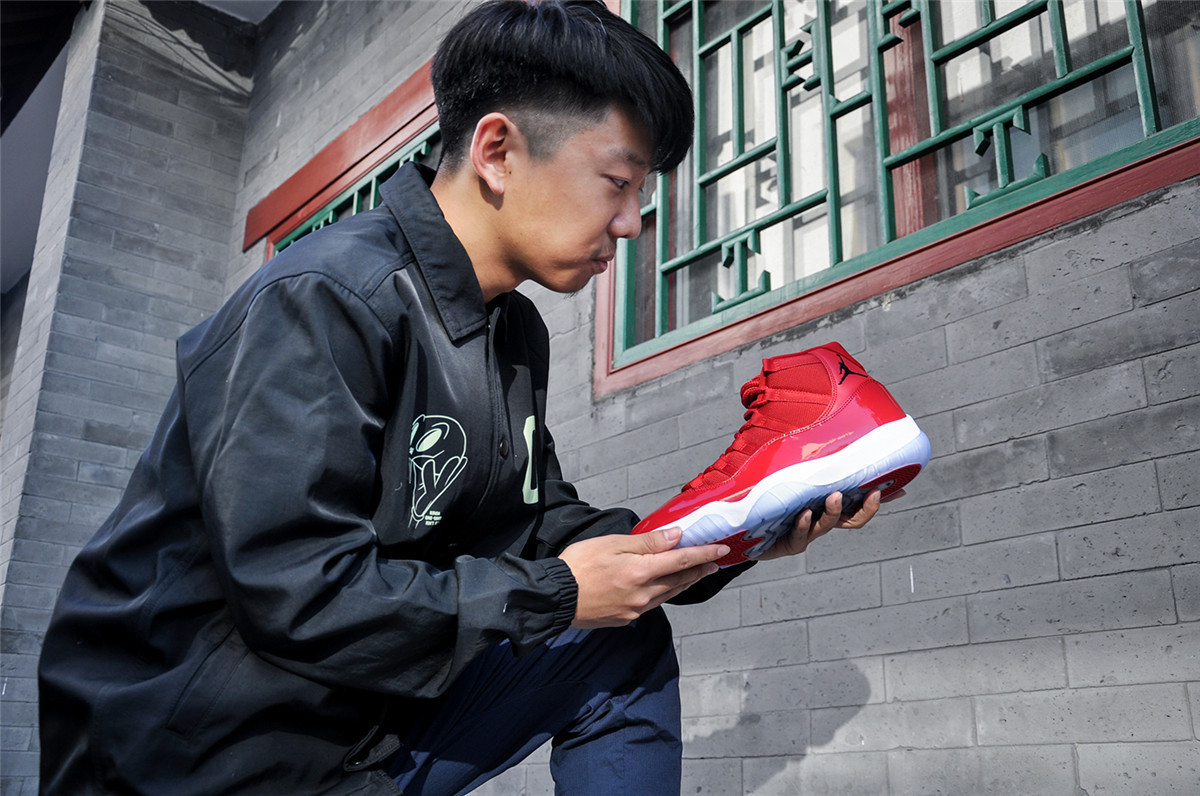 Although the two new colors are not OG color, I like this Air Jordan 11 “Win Like 96” because this red is very similar to the player version that full red  New Year’s taste, which makes it a must-have item at the end of the year. 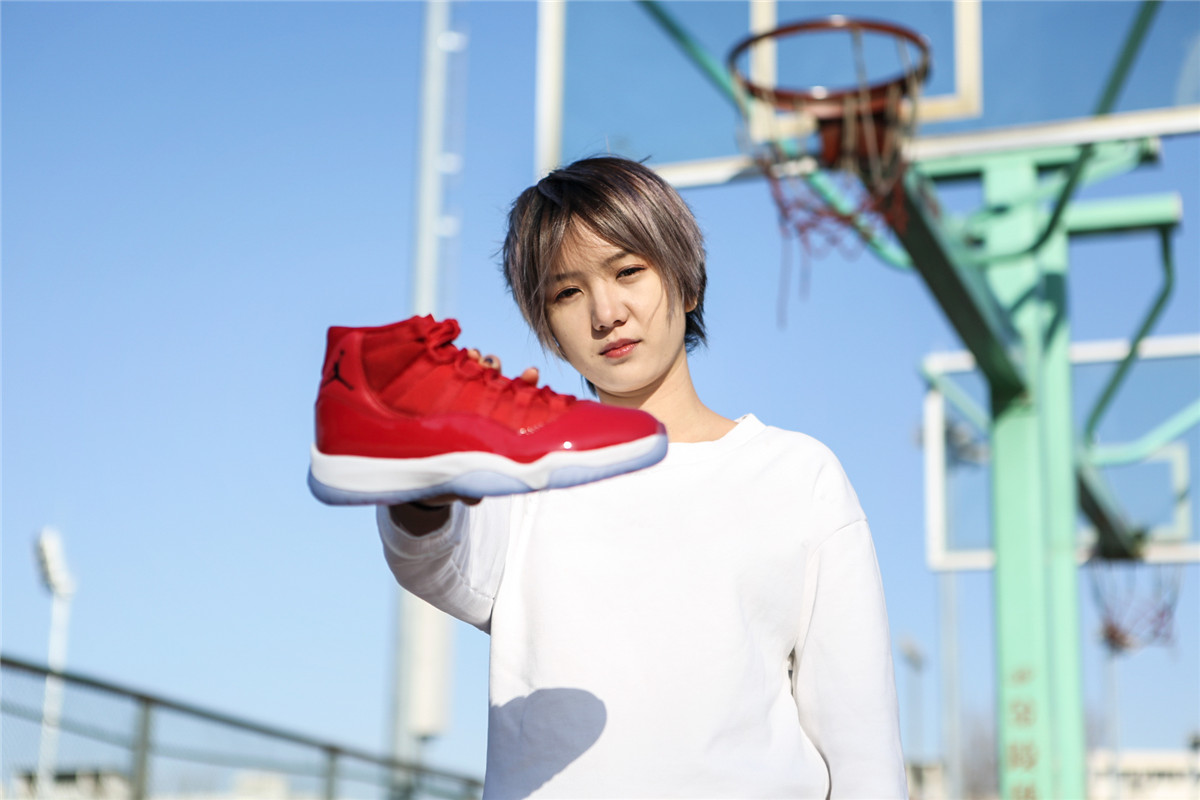 The classics of Air Jordan 11 always the classic one. It is just like a gold. The shoes should not be measured by price. If you like, you should start as soon as possible. 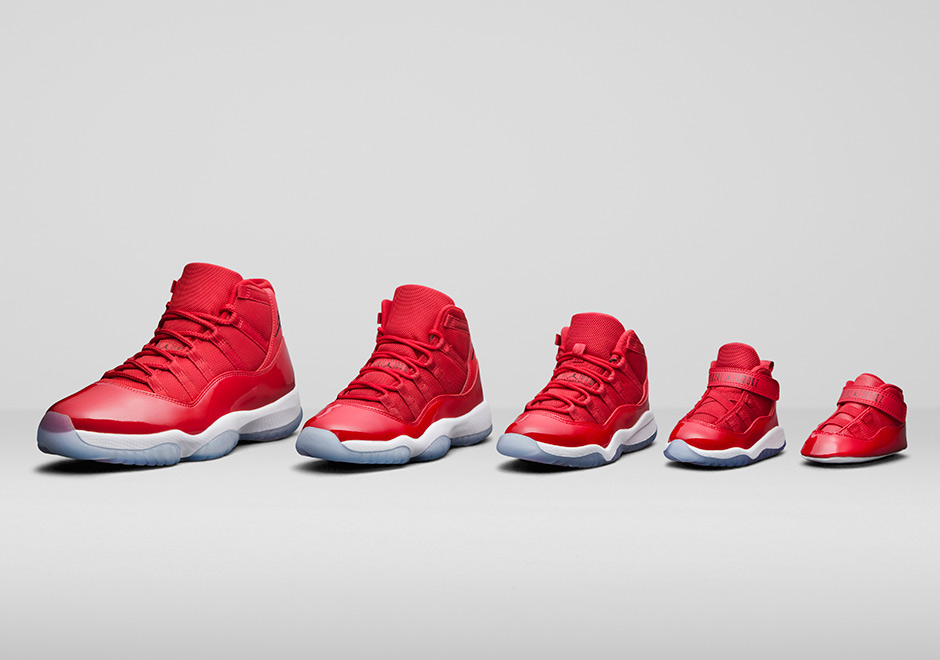 Overall, Will the bold and attractive all-red colorway of the “Win Like ’96”, combined with its retail abundance give it a chance to give the “Space Jam” a run for its money? That release will certainly be hard to top, but if any shoe has a chance, it could absolutely be this one.All of us are expecting this shoe anyway.