Ultra Boost has always been popular, and both runners and shoe fans have consistently promoted this fashion running shoe. At the end of last year, after adidas launched Uncaged Ultra Boost, it was simply subverting the whole wave of shoes. Everyone rushed to buy, and some people even spend more higher price to get one .Adidas knows the passionate love of the fans for the “Umtra Boost” and decided to officially launched the first pair of Ultra Boost Uncaged series, which wind a  trend of the “walking” .

But what is it  like ? How does this shoe  performance? Here we will check it . 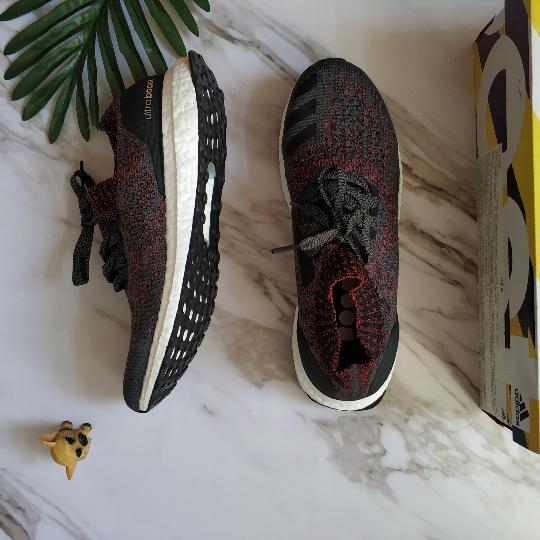 Ultra Boost Uncaged  featuring a fall-ready blend of dark burgundy and black across the shoe’s usual Primeknit upper with the heel counter in a textured matte black finish. 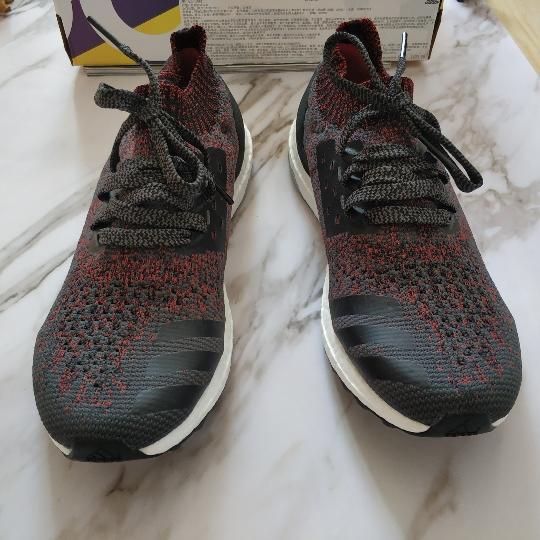 The Uncaged series of shoes combines functionality and style with Primeknit weaving technology to create a breathable and comfortable wearing experience with a clean, sleek look. Compared to the original Ultra Boost, the Uncaged series features a flexible sock-style design that perfectly encases the ankle and enhances flexibility. Adidas also abandoned the  plastic cage with three strip on both sides of the shoe . 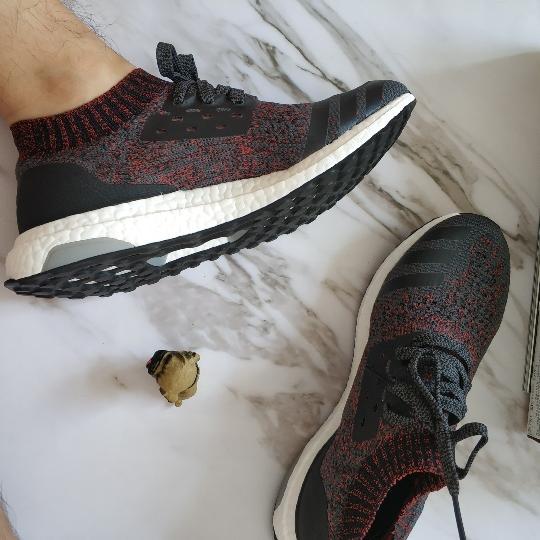 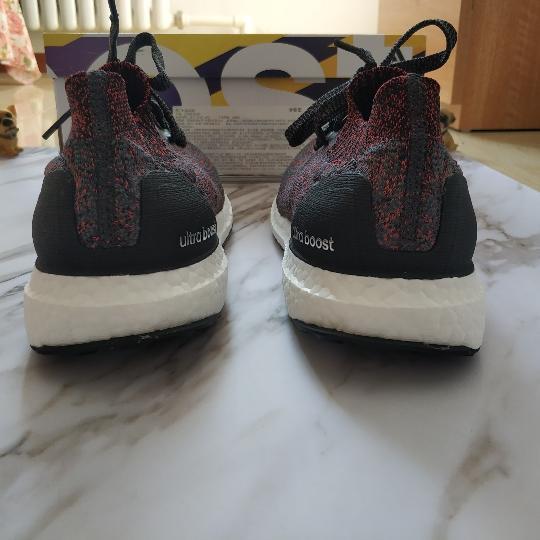 The most obvious is that the outside is obviously thinner than the inside. In fact, the reason why is because during the running process,  most people are touching on the ground outside of the foot when you walking . The heel wear of the shoes if you look your shoes’s traction. Generally,the out side of midsole  will be wear easily compare with the inside midsole. For running shoes, if the heels are flat on both sides,then it is easy to twist the ankle after rebounding, so it is easy to twist the outside. 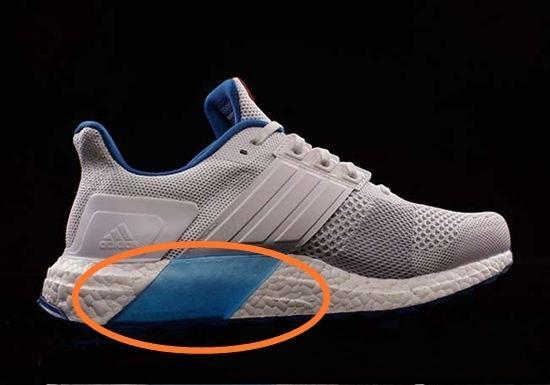 So one version of the Utra Boost  used the plastic torsion syatem to provide the stability . 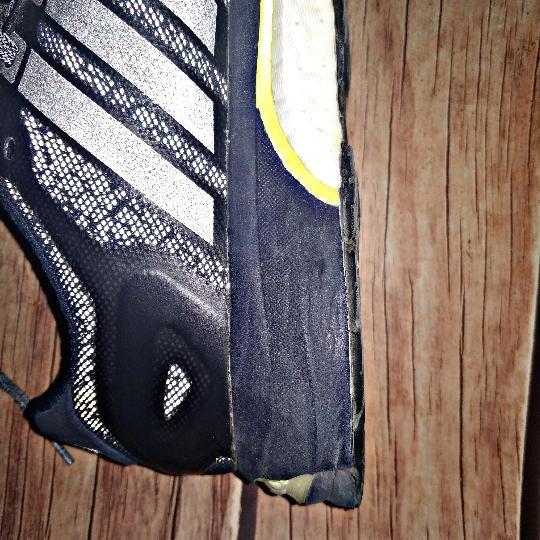 The inner surface is covered with a high density eva material. Both played a good role to avoid the torsion . 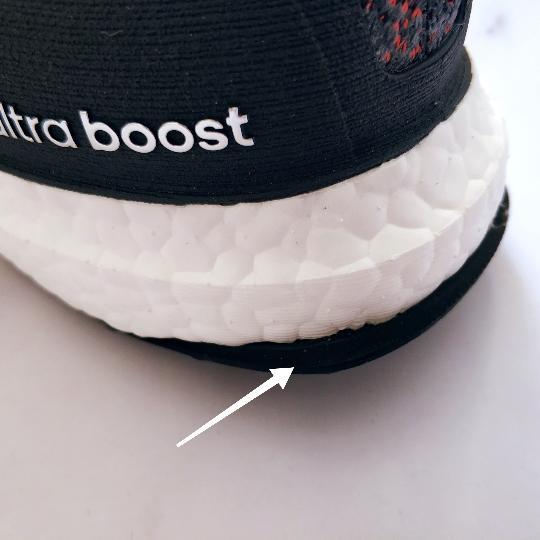 The main role of this overhanging  of outsole. that is  to protect the heel material avoid the wear and tear . As mentioned above, most people use the outside foot to touch the ground.Then we tested it as below : 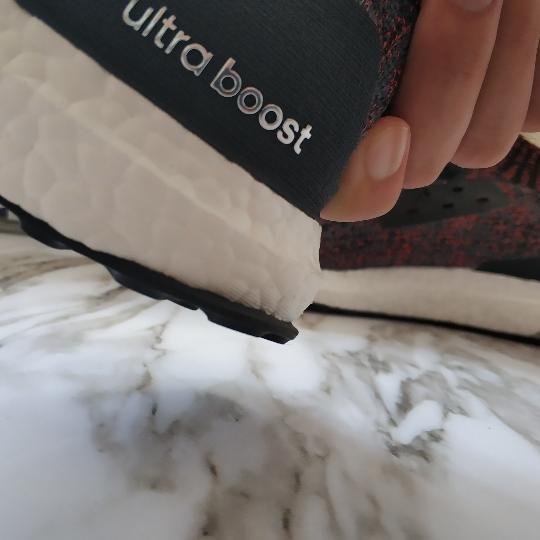 Before touching the ground: 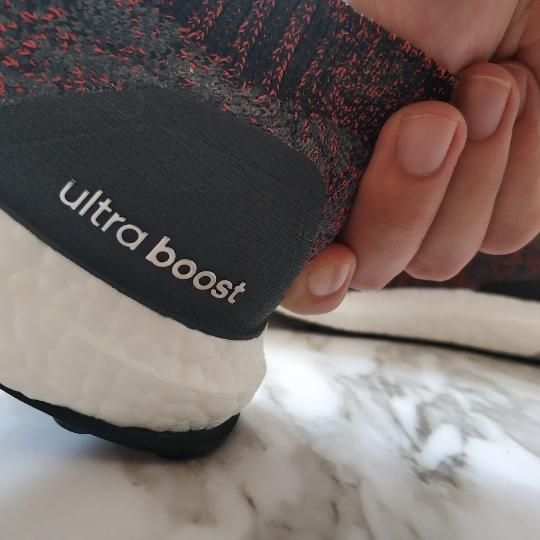 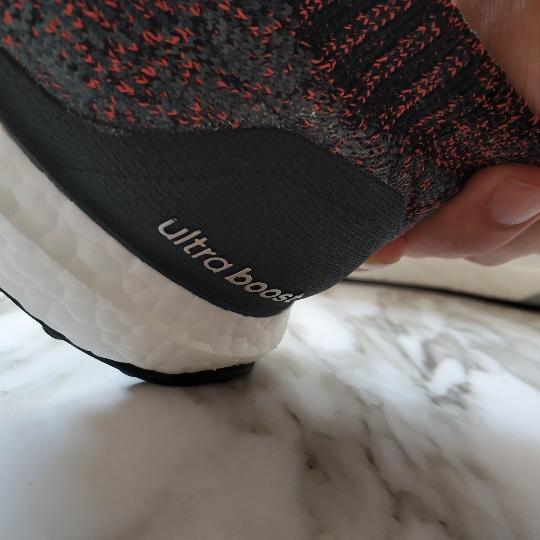 After touching the ground.

So we can see the proceed of touching the ground as above , our heel part also have been protected when we touching . 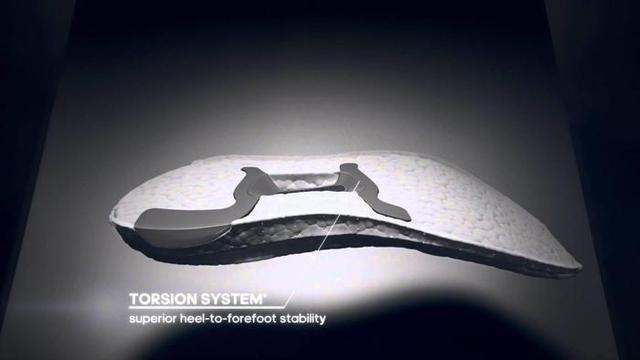 Because boost stability is poor, adidas designed a stereo stabilizer for the Ultra Boost  .The  Torsion system  lies in a recessed cavity, it’s funnel shaped ends spreading up and outwards from there. Also it will provide the superior heel to forefoot stability. 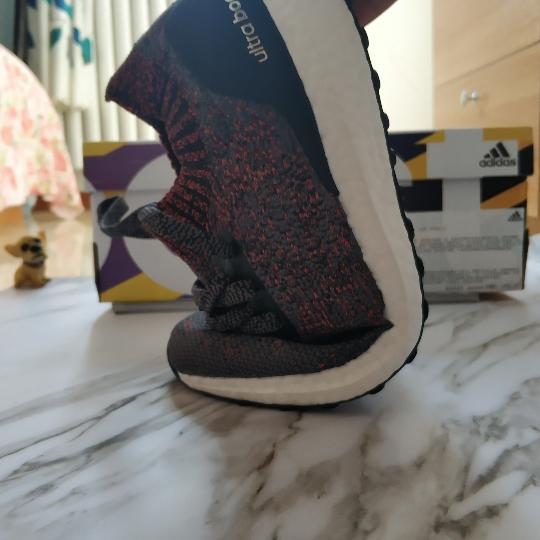 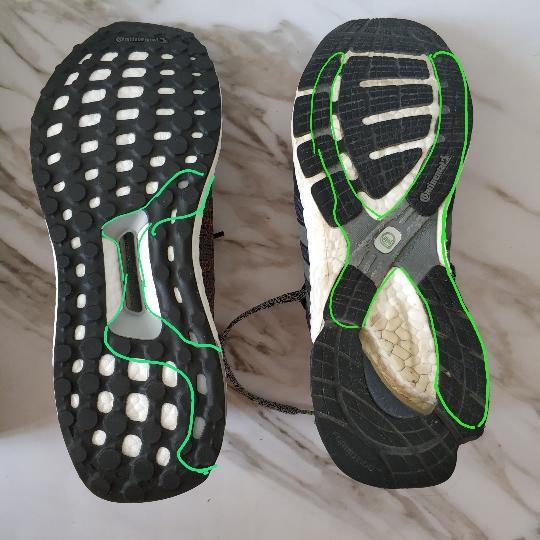 For the traction : The traction with a single piece of soft rubber with rectangular perforations exposing the Boost midsole. This the  most important is the different  compare with the tradition ultra boost. 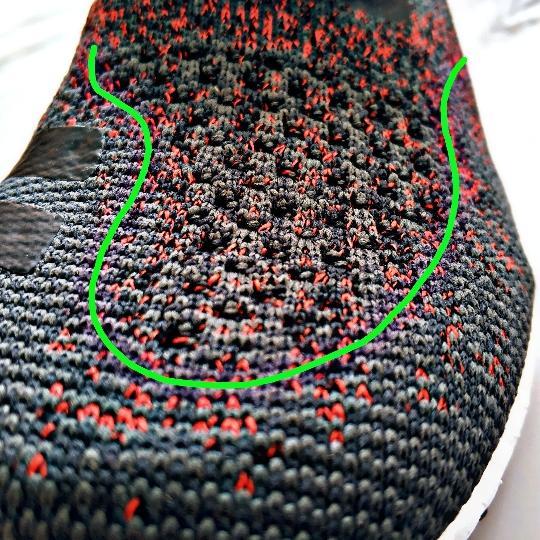 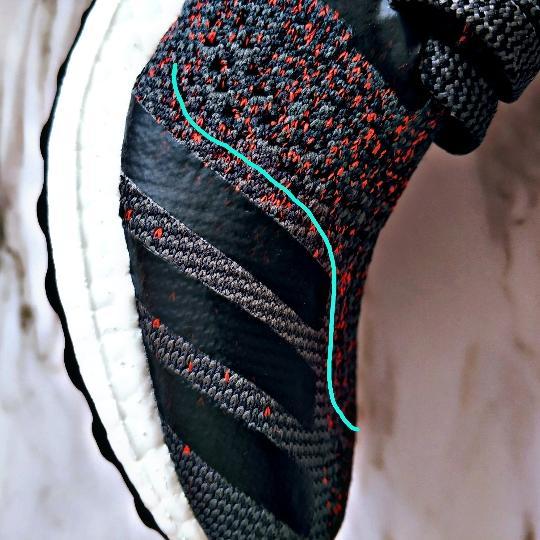 For the material : The Ultra Boost upper isn’t pure Primeknit, but rather a hybrid which uses elastic-knit in forefoot and midfoot, and a bootie construction in the rear which relies on traditional stretch fabrics.

And different weaving methods are used in different parts. For example, the thumb and the toe area are encrypted and thickened which  make it more durable. but the for the part of  instep and the arch, it is use the special weaves to keep the good ventilation.In order to Keep your shoes dry. it is used the heat welded fuse on both sides of the toe and upper. Not only enhances the protection, but also makes the shoes look more straight. 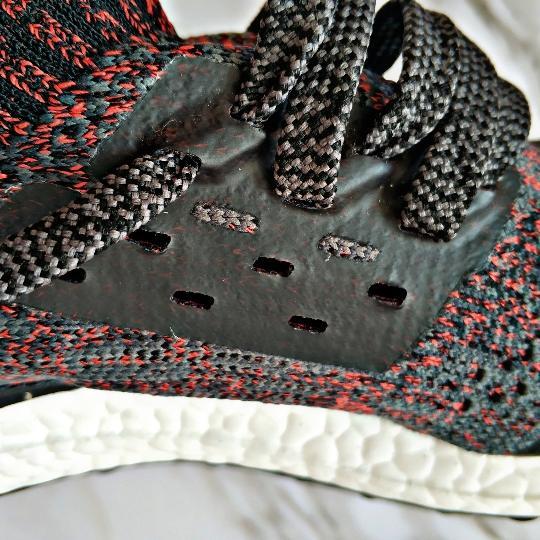 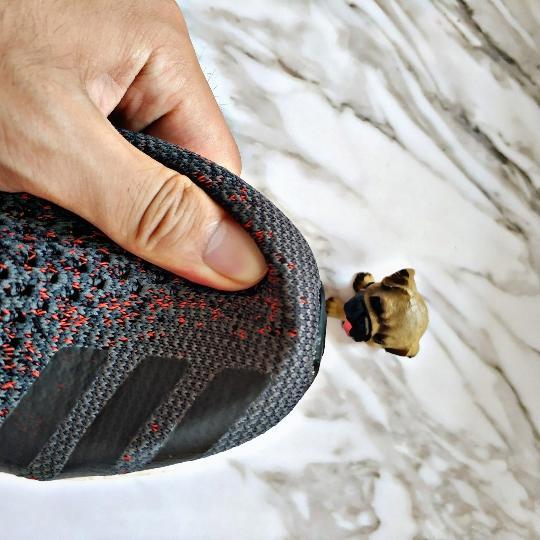 So we can see more details and tested  as below : 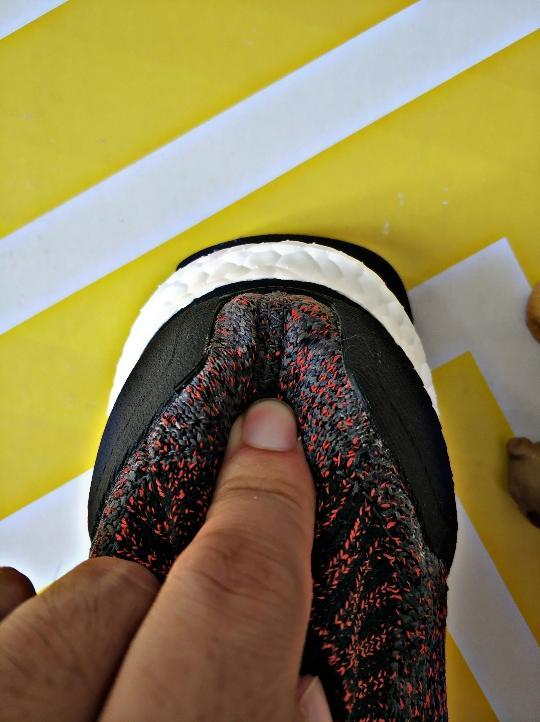 Your big toe being pressed down by the Primeknit upper, though visually it looks like there’s plenty of space ahead of your toes. 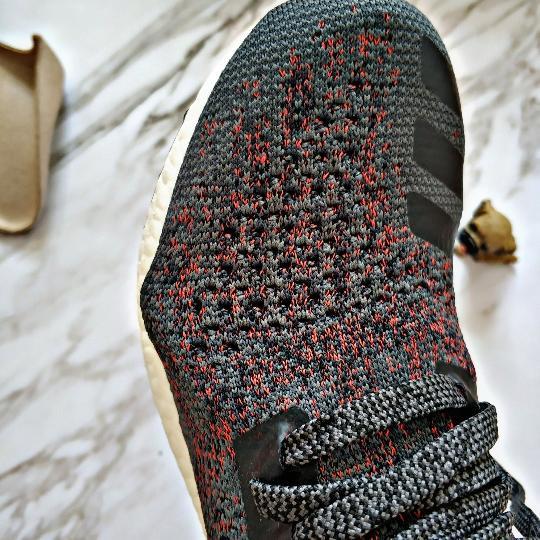 Overall,this pair of shoes is in terms of design and performance. The positioning of its trend running shoes is great.Anyone would expect a truly exceptional product under the circumstances, and we feel that the Ultra Boost Uncaged   still has some ground to cover before it can honestly be called great.